PanDox is a phase I study to quantify the enhancement in delivery of intratumoural doxorubicin concentration in pancreatic tumours. Drug release is triggered from systemically circulating ThermoDox® by highly localized hyperthermia induced by extracorporeal ultrasound-guided FUS device at sub-ablative powers. Patients are assigned to receive either doxorubicin (Arm A) or ThermoDox® (Arm B).

This window-of-opportunity study takes advantage of the time period that patients wait prior to undergoing first line treatment. We plan to deliver the therapeutic intervention during the period that patients wait to commence first-line treatment for locally advanced or metastatic pancreatic cancer. By utilising this window of opportunity, experimental treatment can occur without disruption to planned standard of care therapy.

18 evaluable patients with localised advanced or metastatic pancreatic adenocarcinoma, where surgical resection is not indicated, will be enrolled into the study. All patients will be reviewed for the feasibility of performing FUS and anaesthetic, as assessed by a multi-disciplinary team at the site, for suitability into Arm A (doxorubicin) or Arm B (ThermoDox®) using the following criteria: 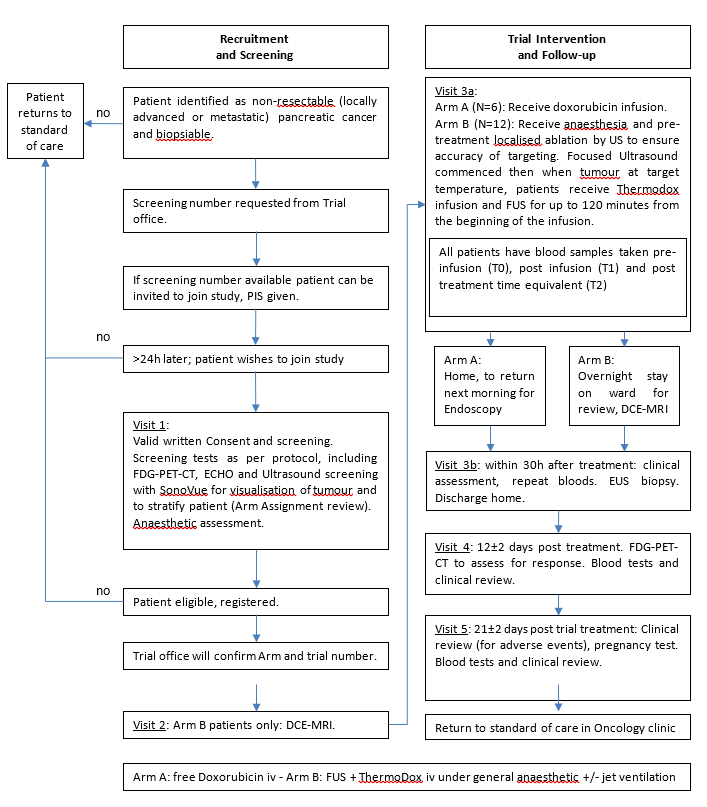 1.   Able to give informed consent prior to any screening procedures being performed and is able and willing to comply with the protocol and its requirements.

3.   Prior histological or cytological confirmation of pancreatic adenocarcinoma

6.   Willing to allow his or her General Practitioner and Consultant, if appropriate, to be notified of participation in the trial.

7.   Life expectancy of at least 3 months

To quantify the enhancement in intratumoural doxorubicin concentration when delivered with ThermoDox® and mild hyperthermia generated non-invasively by focused ultrasound (FUS) compared to free drug alone.